Dihydrotestosterone (DHT) is an androgen sex steroid and hormone that exercises a substantial effect over multiple tissues and organs of the body. These include the prostate gland, seminal vesicle, epididymis, skin, brain, liver, and also hair follicles, meaning that DHT is directly connected to hair loss.

How is DHT generated? 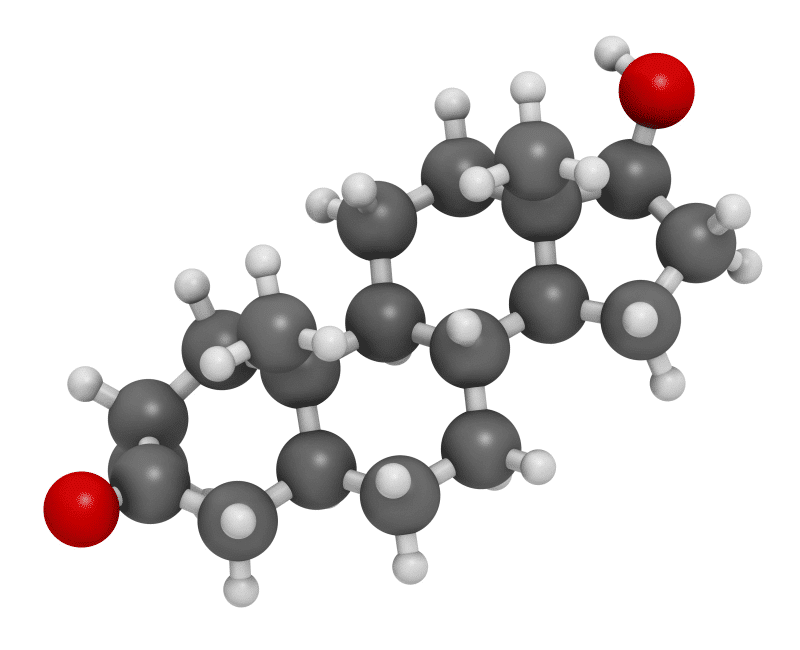 DHT is produced as a byproduct of testosterone. It is estimated that around 10% of the testosterone the body produces is converted by the 5α-Reductase enzyme in tissues such as the skin, liver, prostate, and hair follicles. It is then released in the bloodstream from where it travels to androgen receptors on various tissues to produce predetermined changes.

What does DHT do?

DHT plays a major role in the sexual maturation of male, bringing about the following characteristic changes throughout puberty:

The fluctuating levels of DHT affects both genders differently. In women the symptoms linked to low levels of DHT may be limited to hair loss, but in men a deficiency of DHT can cause late or incomplete growth of sex organs, development of breast tissue (gynecomastia), and increase the risk of developing prostate cancer.

On the other hand, abnormally high levels of DHT also carry negative consequences and are linked to side effects such as slow wound healing, prostatic hyperplasia, prostatic cancer, and coronary heart disease. In females symptoms associated with high DHT levels are an increase in body hair (hirsutism), menstrual cycle abnormalities and acne.

Effect of DHT on hair follicles

Hair follicles are rich in androgen receptors, where DHT gets attached and produces some undesirable effects, the most common of which is the shrinking of the hair follicle, also known as the follicular miniaturization. This shrinking of the follicle makes the hair strand appear thinner, brittle, and fall out more easily.

High levels of DHT are also known to shorten the hair growth cycle, which normally lasts for two to six years. It increases the span of the resting phase (telogen phase) and decreases the duration of the active phase (the anagen phase) of the hair follicle. This shortened life span prevents the hair strand to grow to its maximum length before hair loss occurs.

These detrimental effects on the hair follicle are only observed for the hair on the scalp. The hair on the other parts of the body such as that of the beard, armpits or pubic region, in reality benefit from DHT production.

DHT and hair loss in men and women

DHT is especially linked with the most common cause of hair loss observed in men: androgenic alopecia. According to the latest researches, androgenetic alopecia affects 50% of all male population above the age of 40 with varying severity. Its incidence in the United States is reported to be as high as 50 million in males and around 30 million females.

Androgenetic alopecia (or male pattern of baldness), is a hormonal dependent pattern hair loss, where the hair on the temple and crown region slowly thins out, before it eventually disappears. A milder form of this phenomenon is also observed in females (female pattern baldness), but in this case a diffuse thinning of scalp hair is observed without a receding hairline.

The exact etiology of androgenetic alopecia is unknown, however, multiple genetic and environmental factors are believed to play a role, with DHT validated as one. This is the reason why few genetically susceptible individuals are more predisposed to have androgenetic alopecia even with lower DHT levels than others.

How to regulate DHT levels?

With the role of DHT in the progression of androgenetic alopecia established, extensive work has been done to regulate this hormone to suppress its detrimental effects on hair loss. Several over the counter and prescription medications are currently available that efficiently inhibit the production or action of this hormone.

The following are some of the most popular DHT Blockers:

Finasteride is an FDA approved 5 alpha-reductase inhibitor that is available in an oral preparation. This drug is routinely prescribed to treat prostatic enlargement and hair loss in men. This enzyme blocker is known for its high efficacy in preventing DHT production from its precursor testosterone. Clinical trials report a 70% reduction in DHT production in prostrate and scalp with Finasteride use.

A similar study targeted the use of finasteride for the management of androgenetic alopecia in Japanese men and reported an 87% success rate in terms of hair growth. Only 0.7% of the participants were observed to develop mild side effects from the treatment.

Finasteride is shown to deliver maximum results when administered in adjunct to Minoxidil, a vasodilator. Together these two drugs not only stop the progression of the disease, but also increase the number of active hair follicles.

Side effects from Finasteride are rare and include sexual dysfunction, depression, and gynecomastia. Fortunately, these are reversible and resolve once the medication is discontinued.

Pygeum bark is an herbal extract that is obtained from the African cherry tree and is available in forms of oral supplement. It is known for its potential action as a natural DHT blocker. Its use is particularly popular in cases of prostatic diseases due to this action. However, limited data is currently available on its effect on hair follicles in regards to androgenetic alopecia.

A clinical trial published in 2014, randomly studied 76 patients suffering from alopecia areata using pumpkin seed oil and placebo daily for 24 weeks for the condition. After the said duration the trail recorded a 40% increase in hair count in the pumpkin oil-treated group with minimal to no side effects found.

Sato A, Takeda A. Evaluation of efficacy and safety of finasteride 1 mg in 3177 Japanese men with androgenetic alopecia. The Journal of dermatology. 2012 Jan;39(1):27-32.

Adil A, Godwin M. The effectiveness of treatments for androgenetic alopecia: a systematic review and meta-analysis. Journal of the American Academy of Dermatology. 2017 Jul 1;77(1):136-41.